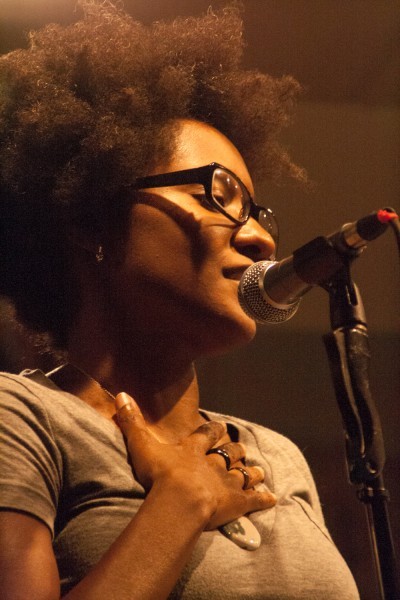 When speaker Mia McKenzie came to campus in fall 2013, she highlighted her own intersectionality as a black and queer woman. McKenzie’s blog often deals with these themes of intersecitonality, and her speech in Reid Coffeehouse did as well. McKenzie highlighted the importance and centrality of QPOC to GLBTQ in any setting and issued something of a call to arms for Whitman’s own QPOC. 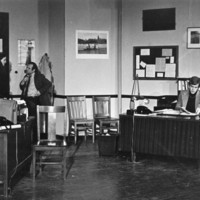 The play Butley is performed at Harper Joy Theater. 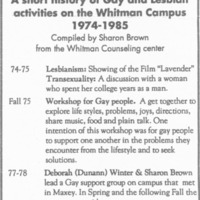 A 1978 panel on homosexuality was led by students, faculty, and community members. 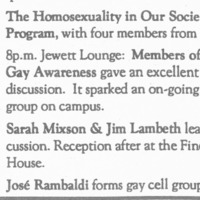 In 1979, Whitman hosted a panel discussion of gay students from Washington State University. 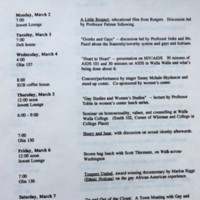 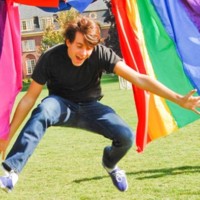 National Coming Out Day made its first appearance at Whitman in 1990. 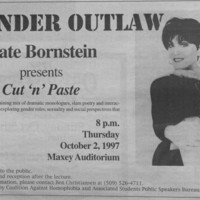 In 1997, Kate Bornstein performed her play “Cut ‘n’ Paste” for the Whitman community.

On April 15 and 16, 1966, the Harper Joy Theatre One-Acts were set “to jolt captive audience.” The cause of the jolt was the performance of two, student directed One-act plays that featured “Homosexuals and low-class working men.” The homosexuals in question are actually two sisters played by male actors. The play contains only the suggestion of homosexuality, but it appears to have been enough to incite a conversation on campus. The play, “The Maids” by Jean Genet, was directed by student Otis Calef. The Pioneer praised Calef for his ability to hint at homosexuality in a way that raised the question in the audience of “whether there are also certain homosexual potentials in all of us.” Harper Joy Theatre already had a reputation for discussing sex and sexuality after Jack Freimann’s direction of “The Knack” in 1965. Unlike “The Maids,”
“The Knack” examined heterosexual relationships and the role of violence and compassion therein. Despite the difference in subject matter, the open discussion of sexuality on the stage was set by Freimann’s presentation and continued into the realm of homosexuality for the first time with “The Maids.”

← Clubs and Organizations
College and Community →
Events on Campus