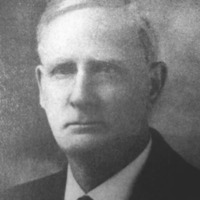 “He used to ride around all over the country on his bicycle -- down to Wallula -- you would find him riding his bicycle around the cliffs down there, examining the rocks. . . . He was a most interesting man and a most inspiring teacher.”

Benjamin Brown was a physics professor at Whitman for over 30 years.  When he started teaching at Whitman in 1895, all of the science disciplines were grouped together in a single department. For a time it was Brown’s duty to teach all physics, geology, and astronomy courses; once the college had enough funds to hire more professors, Brown was able to specialize in physics. Whitman still lacked sufficient resources for science equipment, so Brown built it himself, including a machine that could measure the weight of the Earth and a dart game for determining the value of pi.

Brown was a humble man who took pride in his students’ accomplishments over his own.  Whitman’s seventh president Chester Maxey said of Brown: “He had a rare gift for original research and he knew how to make research deeply meaningful to his students.”  In 1924, three Whitman physics students entered a competition for a Harvard engineering scholarship.  The winner of the scholarship hailed from Whitman and the runner-up, also from Whitman, did so well that he was offered a scholarship as well. The third Whitman student placed in the top ten.  All three were students of Benjamin Brown.  These students’ successes indicate the outstanding curricular strength of Whitman’s physics program.  Brown even had an influence on non-physics students—his course in geology and astronomy for juniors was for a time the college’s most popular elective course.

Though he was an expert in physics, geology, and astronomy, Brown never let anyone address him as “Doctor” because he hadn’t been able to afford a doctorate.  When he was able to afford a car, he would still walk to campus because “he would have to drive by homes where he knew the people could not afford a car, and that embarrassed him.”  Brown also declined membership to Whitman’s Phi Beta Kappa society and to a neighboring institution’s Sigma Xi society.

To commemorate Benjamin Brown’s significant contribution to academics at Whitman and the Walla Walla community, an endowed physics professorship was created in his name.  Brown also recognized the importance of connections between Whitman and Walla Walla and “went out of his way to arouse the interest of students and Walla Walla citizens alike in the nature of events going on in the universe about them.”