Virginia Dox was a schoolteacher from New York.  Because of her poor health, she moved West for the fresh air and became the first woman to be sent to a Native American reservation to teach.  Beginning in Oklahoma, Dox taught at many reservations and was made an honorary member of nine tribes.

She became well-known for her skills in oratory, and was a much sought-after lecturer in the East.  Dox’s passion was for new colleges in the West and she developed a special interest in Whitman College.  She went on a country-wide lecture circuit in the 1880s to raise funds and earned $250,000 for Whitman.  According to Whitman’s third president Dr. Stephen B. L. Penrose, these successes led the local community to begin to “feel that the College was a going institution and that its future had been assured by the securing of adequate endowment.”

In gratitude for her service and in recognition of her scholarship, Whitman College granted Virginia Dox a full professorship of philosophy, but unfortunately her health prevented her from ever taking the position.  Health problems only slowed her down so much, though; Dr. Penrose described her as “eloquent, dramatic, picturesque and indefatigable—she became filled with enthusiasm for the memory of Dr. and Mrs. Whitman and the college founded in their honor which she had never seen. She devoted herself with fiery ardor and tireless energy to completing the Pearsons Endowment Fund.”

Little else is known about Virginia Dox’s life, but the time and energy she devoted to the small school helped give Whitman the start it needed to become the school it is today. 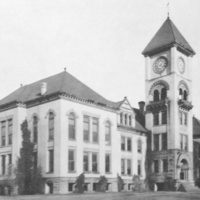