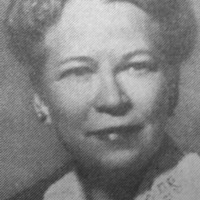 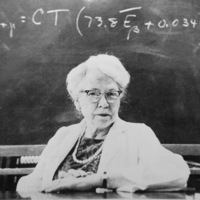 Edith Quimby graduated from Whitman College in 1912 with a degree in physics and mathematics.  Under the instruction of Benjamin Brown (physics) and Walter Bratton (mathematics), she was the first woman to earn this degree at Whitman.  According to Quimby, these professors “set the direction for [her] entire professional career.”  After Whitman, she earned a master’s degree in physics from the University of California at Berkeley in 1916.

Quimby went on the help develop radioactive techniques for the diagnosis and treatment of cancer.  She was a physicist at the Memorial Hospital for Cancer and Allied Diseases; a professor of radiology at Cornell; a professor of radiation physics at Columbia; president of the American Radium Society (both the first woman and the first physicist to hold this position); and recipient of the Gold Medal of the Radiological Society of North America (the second woman ever to win this; the first was Marie Curie).  She also received honorary Doctor of Science degrees from Whitman College in 1940 and from Rutgers University in 1956.

In an essay titled “Why Whitman?” that she wrote to inspire future generations of Whitties, Quimby offered the following reflections on her alma mater:

“[Whitman] was made possible for me by the offer of a scholarship to defray my tuition, and that was the best gift I ever had. . . .”

“Everyone was soon given a sense of ‘belonging’ which was particularly significant for a raw recruit. . . .”

“A girl majoring in physics was a real problem for some of [the faculty]. . . . [Mr. Brown’s] teaching and Mr. Bratton’s set the direction for my entire professional career. . . .”

“I would venture to believe that for a majority of young people a small college offers a more satisfactory stepping-off place. . . .”

Quimby left many gifts for Whitman College, including several awards and medals.  Her classmate Newton E. Barrett ’14 said “no alumna/us stood higher as an example of Whitman’s unique record of preparation for graduate achievement.”